Hello, and welcome to ValveTime Articles! Today, we’re going to delve into the history of Half-Life: Hostile Takeover, an expansion pack for Half-Life that ultimately never saw the light of day. To unravel many of the mysteries behind this little known title, we contacted several individuals who worked on the project for answers.

Hostile Takeover was an endeavor undertaken by 2015, Inc., a Tulsa, Oklahoma-based development company founded by Tom Kudirka in May of 1997. They’re best known today for developing Medal of Honor: Allied Assault which was published by Electronic Arts in January of 2002. The original team was comprised of modders from the Quake community, and they would later go on to form the core of Infinity Ward.

According to Kudirka, he had met members from Valve Software at a Microsoft party in May of 1999 at that year’s E3 event. 2015 having just successfully completed Wages of Sin, an expansion pack for Ritual Entertainment’s 1998 shooter SiN, Valve’s developers were said to have expressed interest in allowing Kudirka’s team to create another expansion pack for their own recent hit Half-Life. The first expansion pack was already in the works by a different fledging developer team, Gearbox Software. A meeting was set up between Kudirka and Valve’s co-founder Gabe Newell, and after agreeing to the terms, 2015’s development on Half-Life’s second expansion pack began immediately.

Although the game was never officially announced, several rumors about its development would soon surface on the Internet. The earliest known public reference to the expansion pack dates back to November 23, 1999, when an article mentioning a new Half-Life game being developed by 2015 was published on GameSpot. On March 18, 2000, The Adrenaline Vault revealed the name “Half-Life: Hostile Takeover” along with an unconfirmed release date of late August of the same year, noting that the title had already begun appearing on retail product lists with its own unique SKU code.

However, by August 7, 2000, the cancellation of the game was finally announced to news outlets. An article from that day by The Adrenaline Vault reported online retailers changing the title of the previously listed “Half-Life: Hostile Takeover” product to “Half-Life: Counter-Strike”, adding to the confusion surrounding the game's fate. A year later, on June 21, 2001, a trademark for “Hostile Takeover” was filed for registration by Valve to be used for “computer game software". However, it was dropped on October 3, 2004, one month before the release of Half-Life 2. It is not known why Valve filed this trademark at that time.

Hostile Takeover was said to be 60% done and only 90 days away from going gold before the plug was pulled. It was built to a point where it was playable almost all the way through, albeit often roughly so. While the reasoning for its sudden cancellation was never publicly stated, members of 2015 have speculated that Valve or Sierra, the publisher, decided against releasing another expansion pack for Half-Life due to fears of oversaturation in the market. 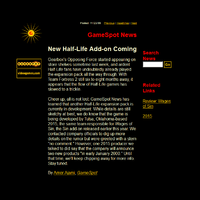 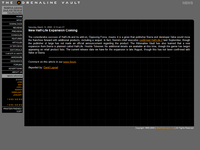 A news post about the game on the Adrenaline Vault (March 18, 2000)​
Overview

The gameplay and narrative of Hostile Takeover was set up similar to Half-Life, but the expansion pack would not feature locations or characters that had already been seen in the series. Comparable to the instances demonstrated in Half-Life and Gearbox’s expansion Opposing Force, Hostile Takeover centered around the idea of the enigmatic G-Man testing potential "candidates" for something, although exactly what that was, the team at 2015 was not told. The player was to take the role of a new "suit”-type character, described by the series writer Marc Laidlaw as a "Junior G-Man" (please see the note at the bottom of the article for further explanation). Indeed, the team worked with Laidlaw to create a story which could utilize the existing Team Fortress characters, an IP which Valve had also acquired, as allies. They were to accompany the player as sidekicks, presenting Team Fortress’s unique classes such as the Heavy or Engineer in place of the ubiquitous security guards found in the original game. These forces were also said to initially distrust the player character who begins in their eyes as a simple "suit", but as the game progressed, they would come to respect him after slowly proving himself.

According to Benson Russell, a designer on the project, the game was originally going to be set in Black Mesa, but about halfway through the development process, it was suggested that the events take place in a different location called “Allied Processing", described as a support facility for Black Mesa. Although the facility appeared from the outside as a typical industrial complex, secret underground areas were located within. Here, an inter-dimensional portal was established and used to conduct mining operations in the alien world to bring back samples for study and processing at Black Mesa. A private military guard consisting of the different classes from Team Fortress was recruited by the compound for its defence.

Due to the disastrous events occurring at Black Mesa, the government was now on its way to confiscate the Allied Processing facility and its contents. Like Gordon Freeman, the player character was to become a catalyst for destroying the compound. The outset of the expansion pack began with the player alone in the depths of the facility, needing to leave the sub-basement level make it back to the surface on his own. During this portion, he would be introduced to and learn how to use the new gameplay features along the way. At the surface, the player met the Team Fortress troops and first encountered the hostile military forces that would act as the primary antagonists for much of the game. The rest of the gameplay put the player through a blend of above and below ground locations, both working solo and with squads at times ultimately striving to escape the catastrophe. 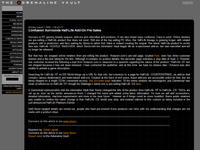 A news post about the game on the Adrenaline Vault (August 7, 2000)

Hostile Takeover planned to include a number of new game mechanics. The developers wished to emphasize interaction between the player and other characters, expanding the elements of the original in which the player had to escort scientists or security guards to unlock specific doors. In addition to the Team Fortress squad members, 2015 also created maintenance workers that would need to be utilized to repair specific objects.

One interesting mechanic related to these workers is that they may have to perform a task in a dark area, requesting that the player to use their flashlight to illuminate what they’re doing, a concept similar to Gordon Freeman guiding Alyx Vance through the pitch black tunnels in Episode One. This allowed for the creation of defence scenarios in which the player had to continuously provide the NPC light to allow the task to be completed while also being distracted by other hostilities.

There would be specific surfaces that the player could jump into and then cling to, traversing along it hand over hand which is described as being akin to a jungle gym.

An energy weapon created by Allied Processing explained in the story to have been based on the research of the Xen aliens. Its appearance was similar to that of the Gravity Gun from Half-Life 2, using claws located at the end of the weapon to focus the energy. It allowed the player to absorb and fire a beam identical to the Vortigaunts’ own attack.

In any outdoor area, the player could use a laser pointer to call in a laser strike from a satellite. The developers have compared this piece of technology to the weapon of the same name featured in the manga and anime Akira, the Hammer of Dawn laser featured in the Gears of War series, and even the familiar Suppression Device in Half-Life 2 found on the roof of the Overwatch Nexus.

This weapon was comprised of a remote controlled vehicle that had an explosive attached to it. The player could control it through an attached camera. A similar weapon can be found in the Grand Theft Auto games.

The player was able to commandeer a tank not unlike those seen in the original game. The developers wanted to create levels where the player fought other tanks and could destroy buildings along with other map scenery.

A “big brother” to the Houndeye, this creature was to emit powerful blasts that could push the player over great distances. This ability would prove extremely deadly in areas with hazards such as cliffs.

These are Headcrabbed monkeys said to act comparable to the Fast Zombies found in Half-Life 2. When Headcrabs were unleashed from Xen during the Black Mesa incident, they ended up zombifying the test monkeys kept in the labs of Allied Processing. The resulting creature was to be very fast and deal massive amounts of melee damage. This zombie type would have been employed to create horror moments, like those in the movie Aliens, potentially seen crawling through air ducts or prowling in dark areas such as sub-basements of the facility.

It is unknown what Laidlaw was referring to in his description of the player character. We do not know if the character worked at Allied Processing or was an outsider sent in to the company for an unspecified reason, perhaps explaining why the Team Fortress squad members initially distrusted him. The player character may have been part of the organization that the G-Man works for or a special agent working for the U.S. government, hence being called a "suit." It should be noted that the G-Man's origins were not fully established, and he was at the time declared to be the Administrator of Black Mesa, effectively a literal "government man" in his role. This title was later retconned to refer to Dr. Breen in Half-Life 2 as the G-Man's role in the storyline was developed further.

Marphy Black's youtube channel has a bunch of interesting Half-Life info. Great write up, never heard of this till now.

Tollbooth Willie said:
Marphy Black's youtube channel has a bunch of interesting Half-Life info. Great write up, never heard of this till now.
Click to expand...

I honestly would have loved to have seen this.

Frankly Valve should hired Barnz as their official historian. Or you should write a book or something. I'd buy the shit out of it.
You must log in or register to reply here.
Share:
Facebook Reddit Pinterest Tumblr WhatsApp Email Link
Top